This blog entry hearkens back to a tale of expertise versus disruption. The scene is DuPont, WA in the late 1990's. Prior to Tiano (2000+) there was an effort to write a BIOS from scratch in the erstwhile workstation product group (WPG) at Intel. The code name of the effort was "Kittyhawk" (1998). Like all boot firmware, the initialization was broken up into phases. Instead of the tuple of {SEC, PEI, DXE, BDS} of UEFI PI of {BOOTBLOCK, ROMSTAGE, RAMSTAGE, PAYLOAD) of coreboot, Kittyhawk had {VM0, VM1, VM2, BOOTLOAD} phases.

Although the platform initialization of Kittyhawk was in native code protected mode C code (and cross-compiled to Itanium for the latter boot variant), this was prior to emergence of IA-32 EFI and it's OS's, which was a parallel effort in DuPont. Instead, the 32-bit version of Kittyhawk relied upon a PC/AT BIOS boot interface for MBR-based operating systems. To make this happen an engineer decomposed an existing PC/AT BIOS from it's POST (Power-On Self Test) component from it's 'runtime', or the 16-bit code that provided the Int-callable BIOS API's. The 32-bit Kittyhawk code did device discovery and initialization, and then the 32-bit code provided the device information in a data block into the generic 16-bit BIOS 'runtime.' This 16-bit code was called 'the furball' by management in anticipation of a day when it could be 'coughed up' in lieu of a native 32-bit operating system load.

This Kittyhawk effort on IA-32 was definitely deemed disruptive at the time. The DuPont Intel site was more of a rebellious effort, with the larger product teams in Oregon constituting the existing 'experts'. There were cries from Oregon that the disruptors in Washington would never boot Windows, and if they did, they'd never pass WHQL, or the suite of compliance tests for Windows. The furball booted OS's and passed compliance tests. It turned out that having a non-BIOS engineer look at the problem didn't entail the prejudices of what's possible, and the work about having a clean interface into a BIOS runtime was used in the subsequent Tiano Framework work such as the Compatibility Support Module (CSM) csm https://www.intel.com/content/dam/www/public/us/en/documents/reference-guides/efi-compatibility-support-module-specification-v098.pdf API design.

So this part of the story entailed providing some caution in listening to the experts, but....

You sometimes need to beware disruptors. Specifically, riding high upon the success of building a common C code based to support IA-32 and Itanium, with the furball providing 32-bit OS support and the Intel Boot Initiative (IBI)/EFI 0.92 sample provide 64-bit Itanium OS support, the next challenge was scaling to other aspects of the ecosystem. Part of this scaling entailed support of code provided by other business entities. The EFI work at the time had the EFI images based upon PE/COFF, so the Kittyhawk team decided to decompose the statically linked Kittyhawk image into a set of Plug In Modules (PIM's).

After the Kittyhawk features were decomposed into PIM's, I remember standing in the cubicle of one of the Kittyhawk engineers and a BIOS guru visiting from Oregon helping with the 64-bit bring-up, the topic ranged over to option ROM's. The Kittyhawk engineer said "let's just put our PIM's into option ROM containers." I was a bit surprised, since to me the problem with option ROM's wasn't carving out code to run in the container but more entailed 'how' to have the option ROM's interoperate with the system BIOS. That latter point is where standards like EFI came into play by having a 'contract' between the Independent Hardware Vendors (IHV's) that built the adapter cards and the OEM's building the system board BIOS.

So the work of the disruptors was laudable in showing that you could have shared, common code to initialize a machine, but to scale to new paradigms like OS and OpROM interfaces you really needed a broader paradigm switch. And as would be shown, it took another decade to solve this interoperability issue.

As such, sometimes you have to be a bit wary of the disruptors, although the disruptive Kittyhawk did provide many learning's beyond the furball/CSM concept, including how up to today EDKII builds its ACPI tables via extracting data tables from C code files. Alas the Kittyhawkfort was shut down as part of the shuttling of the Workstation Group, and efforts to build a native code BIOS solution fell into the hands of the EFI team as part of the emergent (1999+) Tiano effort. At this time there was the EFI sample that eventually grew into the EFI Development Kit (aka the first Tiano implementation), now referred to as EDKI versus today's EDKII. EDK leveraged a lot of the learning's of EFI to inform the Intel Framework specifications, including the phases of SEC, PEI, DXE, and BDS we know today.

This original PEI phase differed somewhat from the PEI you can find in the UEFI PI specification, though. Instead of the concept of C-based PEIM's and PEI core, the original instantiation of the PEI Core Interface Specification (PEI-CIS) was based upon processor registers. There was still the business requirement of separate binary executables and the solution of GUID's for naming interfaces was used. But instead of a PPI database, the PEIM's exposed exported interfaces through a Produced GUID List (PGL) and imported interfaces via a Consumed GUID List (CGL). During firmware construction and update the CGL and PGL were reconciled and linked together. And in order to having services that interoperate, the concept of a 'call level' was introduced. The call level detailed which registers could be used by services in a PEIM since there was no memory for a call stack with this early PEI-CIS 0.3.

At the same time we were defining PEI 0.3, there was another approach to writing pre-DRAM code without memory, namely the Intel® Applied Computing System Firmware Library V1.0 (hereafter referred to as Intel® ACSF Library). 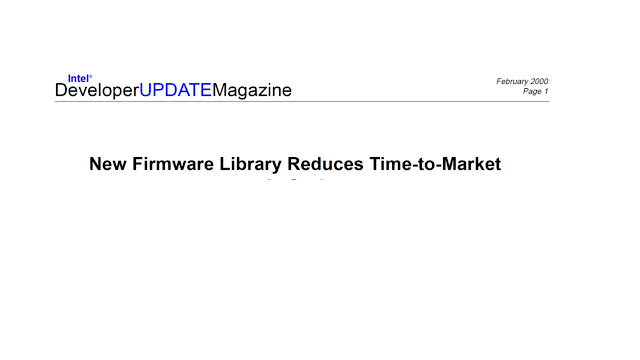 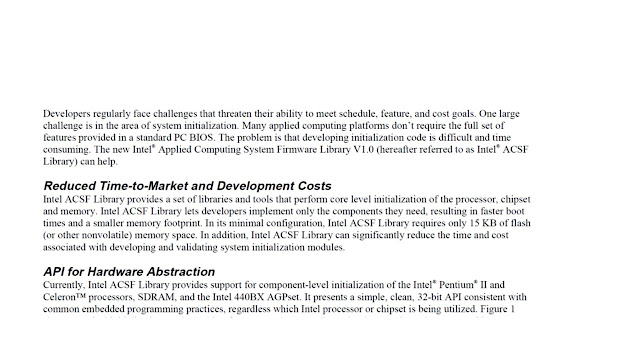 that provided 32-bit callable libraries for boot-loaders. This effort came from the embedded products team and entailed delivering a series of libraries built as .a files. This simplified initialization code addressed the lack of a memory call stack by using the MMX registers to emulate a call stack. This differed from the PEI 0.3 model of reserving a set of registers for each call level. The ACSFL concept was smarter in that constraining PEIM's to a given call level really impacted the composition of these modules into different platform builds.

I do enjoy the quotation 'requires only 15KB of flash' when I wander over to https://github.com/IntelFsp/FSP/blob/master/KabylakeFspBinPkg/Fsp.fd with its size of 592k, or 39x size dilation of silicon initialization code over the last 20 years. This is similar to the 29x scaling in the number of transistors between the 7.5 million in a Pentium II https://en.wikipedia.org/wiki/Pentium_II and the 217 million in a Kaby Lake https://www.quora.com/How-many-transistors-are-in-i3-i5-and-i7-processors. 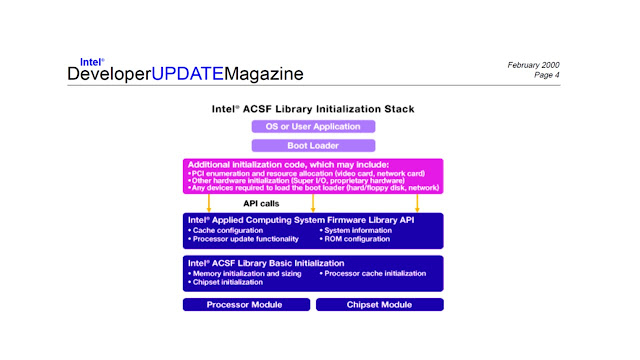 The same article provides the software layering. One can see some similarity of ACSF Library to the Intel Firmware Support Package (FSP). This is no accident since the Intel FSP was intended to originally target the same embedded market, although Intel FSP in 2012 had the embedded mantle being carried by the Intel of Things Group. As another point of irony, the original FSP built w/ the Consumer Electronics Firmware Development Kit (CEFDK). The CEFDK was in fact the evolution of the ACSF library, going through various instances, like FDK. The latter were used to enable phones and tablets beyond just embedded.

So ACSF Library provided some learning's, and at the same time the LinuxBIOS (prior name of coreboot) solved this issue of supporting C code without initialized DRAM via the ROMCC tool.  ROMCC was a custom compiler that used processor registers to emulate a stack so that you could write things like DRAM initialization in C code.

The initial implementations of PEI-CIS 0.3 https://www.intel.co.kr/content/dam/www/public/us/en/documents/reference-guides/efi-pei-cis-v09.pdf with just registers proved difficult to deploy, and since part of the Tiano effort entailed a requirement to use standard tools, techniques like ROMCC were deemed not tenable. As such, as the PEI CIS went from 0.3 to 0.5, we moved PEI to the concept of temporary memory, with using the processor cache as RAM (CAR) as the 'temp ram.' Regrettably we were asked to not disclose how we implemented temp RAM, and the technique and initialization code were not made open source or published (and a modern instance of this reluctance can be found in the FSP-T abstraction of FSP 2.0). The coreboot community, though, didn't have this constraint and https://www.coreboot.org/images/6/6c/LBCar.pdf https://www.coreboot.org/data/yhlu/cache_as_ram_lb_09142006.pdf provided details on how to use this technique.

As time progresses, I am amused about the various recollections. During the late 2000's someone told me 'you rewrote PEI many times' when in fact the only substantive change was going from registers in 0.3 to temporary memory in 0.5. Although not necessarily a full re-write, the EFI implementations did have a long history: 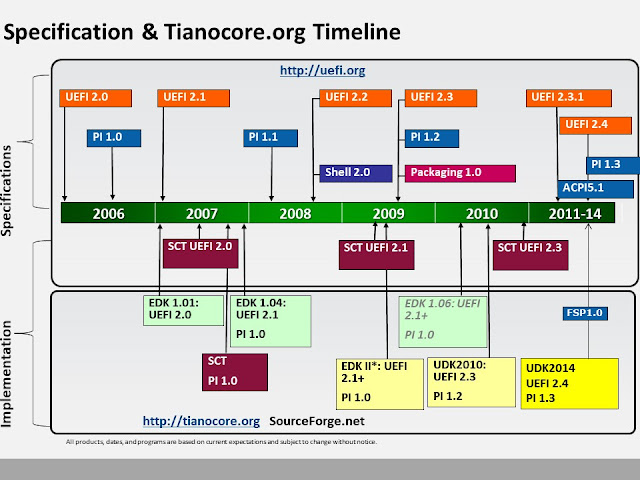 Also, some fellow travelers mentioned to me their fond recollections of EFI discussions in 1996. I smile because the first discussions of EFI (in the form of IBI) weren't until 1998. But I suspect everyone's memory gets hazy over time, with this blog post having its own degree of fog and haze.

And these efforts also remind me that changes in this space take time. A recent reminder that api support takes time, such as the discussion of the EFI Random Number protocol in Linux
https://www.phoronix.com/scan.php?page=news_item&px=Linux-5.5-EFI-RNG-x86. This is an API that was defined in 2010 by Microsoft for Windows 8 and then introduced in the UEFI standard in 2013. Or features like UEFI secure boot from 2011 UEFI 2.3.1 showing up in Debian Buster https://wiki.debian.org/SecureBoot just in mid 2019.

The other interesting perspective is https://fs.blog/2019/12/survivorship-bias/, namely you often hear about the success stories, not failures. Only for extreme cases like https://en.wikipedia.org/wiki/Normal_Accidents do you find a rich journal of failures. So in portions of this blog and the EFI1.2 discussion in http://vzimmer.blogspot.com/2013/02/anniversary-daynext-arch-ps-and-some.html I have tried to shed light upon some of the not so successful paths.