Did a book inspire your choice of a profession?

At the last Intel Developer Forum in San Francisco, Intel's futurist David Brian Johnson talked about the Tomorrow Projects http://www.tomorrow-projects.com/.  I downloaded one of the related texts from David's works, namely Science Fiction Prototyping.  The book talks about Science Fiction and how it contributes the the "future casting" efforts.  The quote that I took away from the book that inspired this blog entry, though, was how many of the pioneers in aeronautics were inspired by the science fiction of Jules Verne.  For me, the book that inspired my pursuit into electrical engineering, and then the computing sciences, wasn't from the genre of science fiction so much as science fact.  Specifically, I recall Norbert Wiener's Cybernetics as the text which fused an information theoretic view of the world, including control theory, as an inspiration. 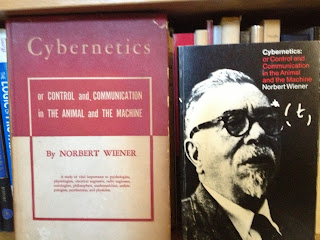 I would be curious whether others had a specific book or author that inspired their professional pursuits.

Starting with a scientific degree doesn't necessarily guarantee a successful engineering career, either.  In fact, one of the best programmers with whom I've had the pleasure to work during my early career didn't even have a degree in computer science or engineering.  Instead, he was an ex-Marine who afterward joined the Trappist order in Gethsemani http://www.monks.org/ for ten years, studying Heidegger's Being and Time while observing the silence and working in the fields. After leaving the order he returned to Houston and picked up a bachelors degree in philosophy.

What does philosophy mean for tech?  Consider the fact that most smart phones of 2012 can hold the equivalent of the Library of Alexandria.  But what do most most people use their devices for? Cat watching, such as http://www.youtube.com/watch?v=jI-kpVh6e1U&feature=relmfu and http://www.lolcats.com/.  Why not download from http://www.gutenberg.org/? As such, studying the philosophy and the meaning of existence doesn't sound like such a bad idea.

Now go back to work and/or read a good book.

PS
From the earlier blogs, here's a quick update.  The SF IDF presentation has an audio link at http://intelstudios.edgesuite.net/idf/2012/sf/aep/EFIS003/EFIS003.html.   And for the http://pdxlinux.org/ talk, the presentation is posted to https://docs.google.com/open?id=0BxgB4JDywk3MbENUTVdqZkZaUmM   and watch the pdx website for the video to be posted.
Posted by Vincent Zimmer at 10:20 AM

That's a tough one, since I never intended to be a software engineer. The magazine Nibble (Apple II enthusiast mag) taught me there was something "underneath" the programming language I was using, which led eventually to my first job at Award as a jr. BIOS engineer. But one of the books that prodded me to pay attention to detail was my historiography text "After the Fact" http://www.amazon.com/After-Fact-Historical-Detection-Volume/dp/0077292685/ref=sr_1_3?ie=UTF8&qid=1349710049&sr=8-3&keywords=after+the+fact.

Since I never intended to be a software guy (it just payed my bills), its hard to figure. But Nibble magazine (Apple II enthusiast mag) taught me that there was something "underneath" the programming langauge I was using. The book that convinced me that details were important was from my historiography class called "After the Fact" Sort of reverse engineering for historians. http://www.amazon.com/After-Fact-Historical-Detection-Volume/dp/0077292685/ref=sr_1_3?ie=UTF8&qid=1349710049&sr=8-3&keywords=after+the+fact

A great question Vincent. For me, Soul of a New Machine. Check out my full response: http://www.basicinputoutput.com/2014/08/a-book-every-bios-engineer-will-love.html